Pantone Color of the Year

Pantone color of the year – Marsala

Marsala – The New Color of the Year

Marsala, however, is a very appealing color. When I was in Las Vegas at the furniture show I saw some of it. I also saw some color combos that would have been Marsala instead of a sort of garnet red if the designers of the lines had known enough in advance that Pantone was going to announce Marsala.

There were a few that whether it was by chance or intent had items in this color. There was the rug you see above that was beautiful. 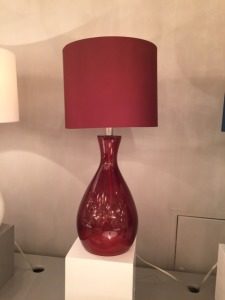 There was also this glass lamp that was a great representation of the color.

There was also an interesting combination with Marsala in one of the showrooms. Their red was a little more of a garnet red, but the Marsala color would be perfect with this new version of celedon. The new celedon is slightly grayer and paler than the standard celedon. Here is the room vignette showing the new color combo.

This new color in combination with soft dusty colors is a very sophisticated new palette.

There was an interesting color combination in one of the showrooms. The red they showed was more of a garnet red, but it would work even better with Marsala. That was to mix with Celedon. Here is a room vignette showing that combination. 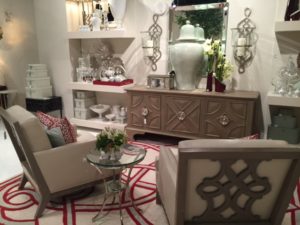 This celedon is a new version of the color. It is a little bit grayer version than the celedon that is usually seen.

This is a very fresh and sophisticated way to use this new Pantone color of the year.

Color of the Year